It was a hectic week on Wall Street that saw the major US equity indices fall as interest rates continued to rise.  All eyes were on the Federal Reserve’s two-day FOMC meeting that concluded on Wednesday with a dovish statement from Fed Chairman Jerome Powell. Surprisingly, the BOJ and a few emerging market central banks announced hawkish moves in policy.  The energy sector, which has been on a tear, fell hard on the week, as did oil prices, perhaps on profit-taking and some sector rotation in front of quarter-end.  Economic data was skewed to the downside for the week, but the Philadelphia Fed Index data had a huge upside surprise. 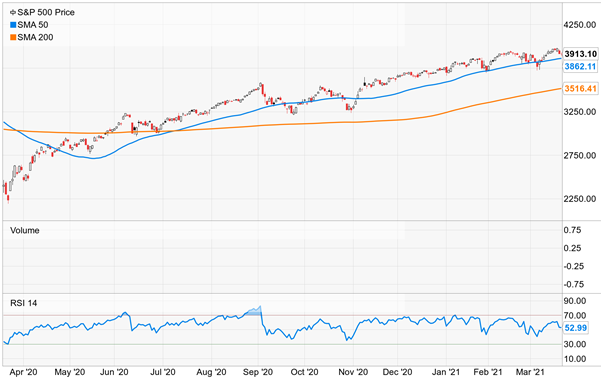 Over the last several weeks, the dramatic rise in interest rates had Wall Street focused on the Federal Reserve’s two-day policy meeting.  In the end, there was no change to the Fed’s policy rate, and the Fed’s dot plot, which depicts when there will be a change in the policy rate, showed no rate change until 2023.  The Fed Chairman’s statement also indicated that the Fed would continue their asset purchase program to the tune of $120 billion a month. It noted that a taper to this action would not occur until the Fed’s mandate of full employment and inflation targets had been achieved.  Interestingly, on Friday, the Fed announced that it would allow changes made to the Supplementary Leverage Ratio calculation to expire at the end of the month.

The SLR calculates leverage at banks, and the policy change last year was made to help liquidity in the market.  The reversion in policy may require banks to raise capital and perhaps curb their stock repurchase programs. Financials sold off on the news.  Some expect the change could also induce banks to sell their US Treasury holdings and hinder their appetite for holding them, which could ultimately help push US yields higher. Elsewhere we saw the Bank of Japan widen its band around the 10-year JGB to 50 basis points from 40 basis points which is a form of tightening.  Russia and Turkey also surprised investors with increases in their respective policy rates.  The pandemic pushed all central banks into an accommodative mode, and interestingly the beginning of divergent central bank policy could expedite changes to asset allocations and increase volatility.

There was quite a bit of economic data announced last week that came in worse than expected.  Initial Claims came in at 770k versus expectations of 700k.  Continuing Claims fell slightly to 4.12 million from last week’s 4.142 million.  Housing starts and permits surprised to the downside.  February Retail Sales fell 3% but were expected to rise 0.2%.  Similarly, February Industrial Production fell 2.2% versus the consensus estimate of 0.7%.  March’s Philadelphia Fed Index results were much better than expected, coming in at 51.8 versus expectations of 23.5 and a February reading of 23.1.

The information in this Market Commentary is for general informational and educational purposes only. Unless otherwise stated, all information and opinion contained in these materials were produced by Foundations Investment Advisers, LLC (“FIA”) and other publicly available sources believed to be accurate and reliable.  No representations are made by FIA or its affiliates as to the informational accuracy or completeness.  All information or ideas provided should be discussed in detail with an advisor, accountant or legal counsel prior to implementation. No party, including but not limited to, FIA and its affiliates, assumes liability for any loss or damage resulting from errors or omissions or reliance on or use of this material.

The views and opinions expressed are those of the authors do not necessarily reflect the official policy or position of FIA or its affiliates.  Information presented is believed to be current, but may change at any time and without notice.  It should not be viewed as personalized investment advice. All expressions of opinion reflect the judgment of the authors on the date of publication and may change in response to market conditions. Due to rapidly changing market conditions and the complexity of investment decisions, supplemental information and other sources may be required to make informed investment decisions based on your individual investment objectives and suitability specifications. You should consult with a professional advisor before implementing any strategies discussed. Content should not be viewed as an offer to buy or sell any of the securities mentioned or as legal or tax advice. You should always consult an attorney or tax professional regarding your specific legal or tax situation. Investment advisory services are offered through Foundations Investment Advisors, LLC, an SEC registered investment adviser.